It is commonly said that the economic development started after the year 1800. In this respect Angus Maddison who was an economic historical analysed the world economy from the Year 1820 to 1992. According to him:

Thus, according to Prof. Maddison there took place big changes in the world’s major economic variables like real GDP, per capita real GDP and population, as:

(1) in this period there was a five time increase in the population of the world,

(2) there was 40 times increase in the real output of the world,

(3) consequently the per capita real GDP increased by eight times. 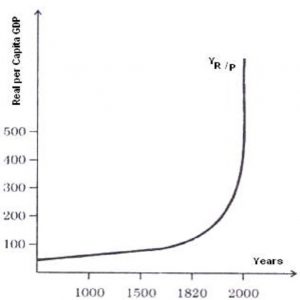