It is very important and the first law of consumption. It based on every day experience of human life that when we use units of a commodity continuously the lateral units give less and less satisfaction to the consumer. In the beginning, we have strong desire to consume units of commodity but with the continuous consumption the desire for commodity to consume diminishes, as the want is satisfied.

The law is relevant for a particular period of time, the law may be defined as:

According to Alfred Marshall:

The additional benefit, which a person derives from a given increase of his stock of a thing, diminishes with every increase in the stock that he already has.

According to Paul A. Samuelson:

As the amount consumed of a good increase the marginal utility of that good tends to decrease.

The more quantity of good you have, the less desirous you will be for a more increase in it.

Or in simple words we can say:

“Other things remaining the same, continuous use of units of a commodity gives less and less marginal utility till it reaches to zero and then becomes negative”.

Explanation by an Example:

Law of diminishing marginal utility can be explained with the help of a schedule. 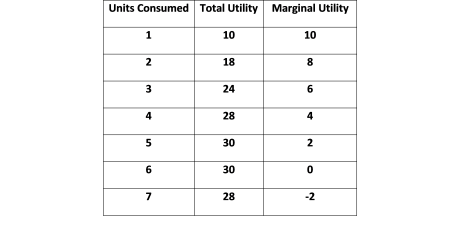 It is clear from the schedule that when our hypothetical consumer consumes units of a commodity continuously, marginal utility is diminishing and reaches to zero and then becomes negative.

The law can also be explained with the help of a diagram. 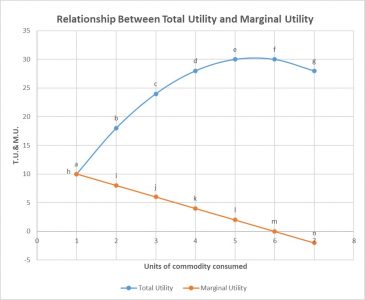 Explanation of the Diagram:

The Law of diminishing marginal utility is based on the following assumptions:

No change in Consumer’s Taste:

Consumer’s Income does not Change:

Following are the limitations of the law:

The law does not apply on knowledge:

It is argued that as income of a person increases his desire to earn more income also increases, because more income means more wants to be satisfied.

Utility of a commodity depends upon fashion, and ostentation. A dress in fashion or used to snob or ostentation, has greater utility and a dress out of fashion has less utility.

The law does not apply to rare collections. A person who is collecting old stamps the more he is able to collect stamps, the greater will be his satisfaction.

The law does not hold good in case of intoxicants. A person who is addict of intoxicants his utility for successive units increases instead of decrease.

The law induces the consumers to maximize their utility. They can spend their income on many commodities instead of one commodity. They can get maximum utility out of their spending. So, consumers benefit from this law while purchasing goods. When a consumer purchases goods he compares the marginal utilities of the commodities purchased and the price paid. If the M.U. is greater than the price, the consumer purchases more and stops purchasing when M.U. is equal to price.

We know that M.U. of money for rich is less than the poor. The law provides the basis for taxing or changing the tax rates. Finance Minister benefits from this law. Higher tax rate is imposed on rich and lower tax rate on poor because M.U. of money for poor is more while less for rich. So, the law is useful for tax authorities There should be high taxes on luxury goods. There must be low taxes on necessities of life. The marginal utility of money to the poor is much higher than rich person.

The law forms a basis of theory of value. It explains how with an increase in supply (demand remains the same) the value of commodity falls.

Basis for some Economic Laws/ Theories:

Economic laws e.g., law of equi. marginal utility has been derived from this law. The concept of elasticity of demand, consumer’s surplus depends upon this law. Law of demand also depends on this law.

The law is helpful to government in socialist countries. There is desire of equal wealth distribution. It is possible by taxing the rich and providing grants to the poor. The rich sacrifice less and the poor gain more in terms of marginal utility.

The law helps to explain theory of value. When supply of commodity increases its price goes down. The fact is that when there Is increase in stock of commodity its marginal utility decreases.

The law explains equilibrium condition of consumers relating to single commodity and want ult shows the behaviour of rational consumers.

The law measures the utility in ordinal terms. Due to such measurement law is valuable. It is not useless at all. The law provides some knowledge to the reader.

The law states that diminishing utility is true for all types of consumption. The consumer is able to satisfy his individual wants. In fact, utility decreases with successive use of commodities

Supply: Meaning and Definition of Supply